If that’s the criterion, government’s 2017 B.C. Education Budget is fake news. While the budget appears 256 million higher than 2016/2017, it does not represent the major
education funding increase it would have us believe.

Here’s there budget for 2017/18 and the proceeding two school years. 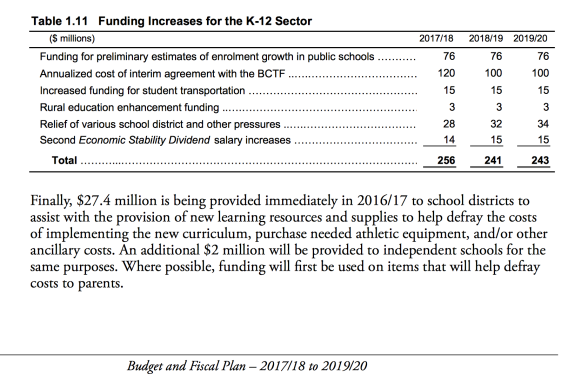 Substantial right? Well, not really. Not if one takes a look at how it actually shakes out.

Line 2 – 120 million “annualized cost of interim agreement with B.C.T.F.(or more accurately,”teachers”). This money is to continue paying the teachers hired this spring as a result of the 50 million dollar “interim agreement to jump start”  addressing the Supreme Court of Canada decision against the Government. This is not a 2017/2018 funding increase, but a continuation of a 2016/2017 initiative.

Line 3 – 15 million – “for increased funding of student transportation.This is also continuation money for a transportation adjustment began last year. A cynic might say that transportation, the first thing cut by school districts years ago in response to annual funding cuts, was centrally resurrected to assure that students can get to their schools of choice.

This is not a funding increase, but another continuation cost of a previous policy.

Line 4 – 3 million – “ Rural education enhancement funding.” This is a sop to interior schools that the government has already announced will stay open despite local imperatives to close them in response to serial government budget cuts. This was committed to last year, and is a return of funding long removed, not a funding increase.

Line 5 – 28 million – “Relief of various school districts and other pressures”. This is the most dishonest of all the government’s budget   misrepresentations.

First, the money is pay back to school districts for downloaded expenditures already billed them for the “Next Generation Network”, a technological hardware upgrade.

And finally, the 27.4 million dollars mentioned in the concluding paragraph for “curriculum implementation”. Clearly it was not included in the budget table because it is so obviously a mere re-imbursement of downloaded costs for curriculum resource needs paid by school districts in previous years.

In short, while the Education Budget has grown, there has been no significant increase in  education funding.

One would be remiss to not mention the  “Learning Enrichment Fund” into which the government will plough 100 million  dollars next year. The “L.I.F. , is a liquid fund,  controlled by the government, who can target it as they see fit. It’s a contingency fund, to offset litigation imperatives if it becomes absolutely unavoidable.

Yet  once again, the government appears to be getting away with their claim that education funding will increase massively in next year’s budget.

Inarguably, and in pure Trump fashion, it’s fake news -fake news gone unchallenged by a media and public whose brains hurt from the government’s continuous  funding shell game. From multiple announcements of the same money to drive by, one year funding announcements, to cut and replace  funding, to representing routine maintenance as new funding, the misrepresentation and obfuscation is mind boggling.

It takes too much time, digging, and analysis to cut through the  subterfuge, and neither public nor media has much of a taste for it.

But the worst part of this fake news is that the government’s considerable circuitousness once again shows the considerable depth of their  animus toward public education .